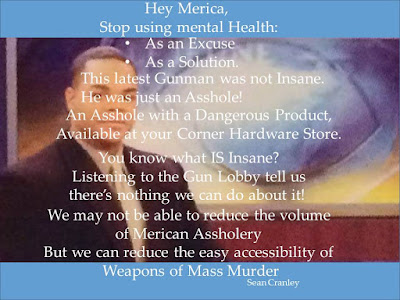 Posted by Sean Cranley at 7:57 AM No comments: 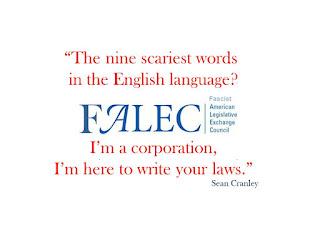 The Fascist American Exchange Council (fALEC), Screwing the Public for Fun and Profit, which would make Mussolini Proud!

Democracy My A$$!
Yours TrulyCorpSerf ID: IMBNFD-OURBNFD-2
Posted by Sean Cranley at 7:19 AM No comments: So on a friend's Facebook page I encounterd one of the most ridiculous forms of "Logic" I've seen in weeks from one of his "Friends". The fact that Al Gore has made money was cited as evidence that Global Warming isn't real.
This is the kind of magical "thinking" that prevails on the FuxSnooze, nose-led right. Newsflash! The only people making big money that has anything to do with climate change are those who are profiting from the industry that removes carbon from the ground and puts it in the air and that wants to make sure that their reserves continue to be emitted for fun and profit. And other than the denial industry Paid Punditry of the GOPropagandists, that is no conspiricy, it's plain old Evil Greed at the expense of our Progeny, which is an insult to our Ancestors!
So I offered the following:
Here is the equation that was im F=5.35 ln C.
It was developed by Nobel prise winning physicist Svante Arrenius in 1896. It is emperically PROVEN that adding more carbon to air will cause it to absorb more heat from the sun. Indisputably!
You know what else is empirically proven? That humans have removed trillions of metric tons of carbon that was safely sequestered in the gound and put it in the atmosphere thus raising the atmospheric carbon concentration. Indisputably!
You know what else is indisputable? The some people think they can keep their finger in the dike of reality with simple denial, it's only a theory they say. Well electromagnetism is only a theory, so go stick a fork in a wall socket. Gravitation is only a theory, so climb up on the roof and take flying leap, Sheesh!

We're just going to disagree on this one...and I will not resort to name calling or derogatory, personal attacks like some folks...Anyone who looks at the data on both sides will come to the the conclusion that Catastophic Man Made Warming is a complete hoax. However, the Warmists will not only refuse to listen to any contrary arguments, they will also fight to prevent others from hearing anything that contradicts their dogma. This is all about CONTROL! Controlling what light bulb you can use, what toilet or car you have, etc.I see you follow Breitbart Sean C,C. Have a look here in case you missed it...

(NOTE: I haven't looked at that @$hole Breitbart in at least a dozen years, so I don't know where that comes from, must have looked me up the Googles I guess. But as a geologist I can tell you that equating natural climate fluctuations with anthropogenic climate change which result from totally different cause and operate on completely different time scales is exactly the kind of fodder fed to the feebleminded.)

No Mike, 97% of the scientists who actually study the subject agree that we are causing the planet to heat up. There is neither equal quality information, nor honest motives on both sides, it's completely lopsided. I suggest that you investigate who the Merchants of Doubt are. Remember when tobacco didn't cause cancer? Yes, those people:http://www.merchantsofdoubt.org/What I presented above are some scientific FACTS. Facts that you have neither disputed nor provided any countervailing, vetted informtion. I don't believe that you can, but I'd like to at least see an attempt.. What you've presented above is a layman's opinion based on nothing, which is exactly what it's worth.

Which begs the question once again, Why Can't Conny Debate?

Answer: Because it's a Faith-Based Ideology!
Posted by Sean Cranley at 7:11 AM 1 comment:

Well this explains a lot. Wrong Way Walker says he hit his head and that caused his bald spot. Seriously!? Can this man not be tell the truth about ANYTHING? Hey, there's a new malady in the Badgered State - WWWalker Patterned Falseness!

Well, I'll cut him some slack, maybe the fact that WWWalker's a Bald-Faced Liar is due to a Traumatic Brain Injury.
Posted by Sean Cranley at 8:17 AM No comments:

Nice event on Werdnesday! About 50 to 60 folks showed up to hear Mike McCabe's Blue Jean Nation pitch, which was both inspiring and encouraging. We'll be offering a copy of his book, Blue Jeans in High Places at an upcoming BAP event! "We are commoners. We are politically homeless. We want more common sense in government. We want concern for the common good to be far less uncommon. And we are pulling together to make it happen."
Whaddya think Burlington Area Commoners?!
Posted by Sean Cranley at 3:42 PM No comments:

Mike McCabe of Blue Jean Nation
Will address the Burlington Area Progessives
About how we can restore America's representative democracy!
Wednesday August 12th
Burlington High School Auditorium
Meet & Greet at 6:00 - Presentation at 6:30
Mr. McCabe provided a wonderful presentation back in 2006 for BAP as head of the Wisconsin Democracy Campaign and we're excited to have him back as we approach our 10th Anniversary!
Come one, come all, open to We the Public, no charge for admission!
Yeah that's right - Ten Years of BAP in Burlington Baby! 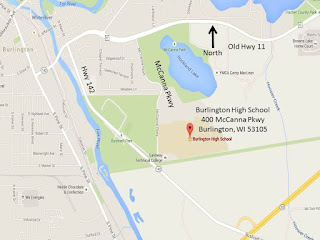 Posted by Sean Cranley at 7:52 AM No comments:

Daffy Ducks. Consequences schmonsequences, as long as they cut my taxes. Down Down Back Back MINE MINE MINE!!!!!!!!!!!!!

Seriously though, there is zero doubt among thinking people that George W. Bush was THE Worst president in American history. And on issues from middle-east policy to healthcare to social security, the Republicon candidates were sound very much like Bushyboy. That excludes John Kasich, that rational Republicon Rarity, thanks to the endangered species act.

What could possibly compel Americans to consider voting for people that would send their children to die in vain on foreign sands, jack the deficit sky high, deny your healthcare, destroy your retirement, corrupt what little is left of your democracy and force your wife, the mother of your children die in favor of fetus. Conswequences Schmonsequences!

The answer? Greed, egoand fear. The propect of saving a dollar on your property taxes here in the Badgered State, thanks to Wrong Way Walker (who did nothing but rapidly rattle off canned talking points in last night GOPster debate) and the vain notion there they're self made men that supposedly don't need gubmint, because they were born white, male and middle class and dispite all odds, rose to become white, male and middle class. Then of course you have to be afraid, be very afraid! Hug your gun, worry about brown people and Dafetly Duck'n Cover. Rubes!
Posted by Sean Cranley at 6:16 AM No comments: