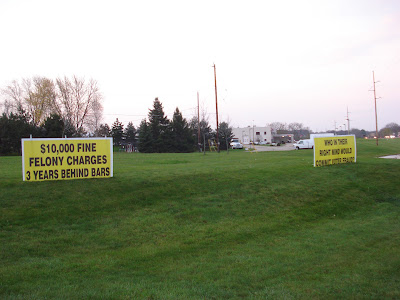 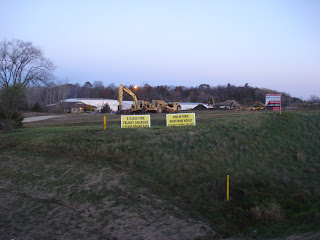 Republicons truly are the party of dirty tricks and low down tactics. Every election year we see the GOPster misinformation swing into gear, misleading targeted democratic leaning voters (minorities) on when, where and if they can vote, purging them from the voter rolls and other acts of skullduggery.

Here we see two Burlington businesses playing along with the coordinated campaign of dirty Republicon tricks.

The posters read "$10,000 FINE FELONY CHARGES 3 YEARS BEHIND BARS" and "WHO IN THEIR RIGHT MIND WOULD COMMIT VOTER FRAUD?"

Of course the answer is, other than Robin Vos' estranged wife, almost no one. Wide spread voter fraud is a nutty conspiracy theory. It just doesn't happen and the logistics of pulling it off year after year without getting caught are so mindboggling that you have to shut your brain off to even begin to believe in it. Fortunately for the party bosses their ideologically blind followers are really good at doing just that when given their marching orders.

The Republicons have to keep the sinisterly intended myth of wide spread left-wing voter fraud conspiracies alive in the minds of their base. And so they lie to their own people. How else will they be able to justify voter ID laws that are uneeded by anyone except the Greedy Oligarch's Party who need them to prevent minority citizens from voting if they hope to remain both a viable political party AND a party of backward thinking angry old white men. Demographics are not on their side, so they lie and try to enact new Jim Crow laws.

But this is about more than denying American citizens their right to vote based on race, pushing through unnecessary and costly bureaucratic rules. It's also about voter intimidation and supressing the vote. They're trying to make going to the polls a scary thing for people who might be unsure about exaclty what the rules are and how to avoid running afowl of them, people who might feel like they've been targeted by authority figures before and fearful that they will again. Again we're talking about minorities who have a legitimate right to vote, but might not be sure if that run in with the law they had when they were 17 disqualifies them to vote. And if it does, well better safe than sorry, why risk a fine, a felony charge and jail time to cast one vote, right?

If the Republicon Party really believed their own talk of perennial wide-spread left-wing voter fraud they wouldn't spend their money on signs, they'd offer a big reward for catching or infiltrating the fraud conspirators leading to arrest, prosecution and punishment which would be a huge deterent to potential future offending conspirators. But they don't do so, because they know that the reward would go uncollected and that would expose the fallacy that must be maintained in the minds of the Cult of Con indoctrinants. If the rank and file started questioning the voter fraud article of faith, just imagine what else the faithful might start to second guess with regard to the Gospel of Con!

Not only is this coordinated effort at intimidation and misinformation aimed at fellow citizens un-American, it's down right nasty. But just as importantly it's purely dishonest. And why would you trust a business that posts lies right on their front lawns to deal with you honestly and fairly? These businesses do not deserve your business, don't give it to them! 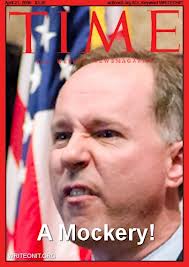 Do you think you have freedom? Do you think you're governed through the informed consent of the citizenry as the founders intended? Do you think your state legislator represents you and your neighbors? Well, do you know that lobbyists from global corporations are voting in secret along with your Republicon State Legislators across the country on laws to rule you from your statehouse!? That’s not democracy. That’s not a Republic, it’s a crassly selfish betrayal of what America is supposed to be.
Here in Wisconsin, State Assemblyman Robin Vos is the state chair of the lobbyist group the American Legislative Exchange Council and he is sworn to enact ALEC’s corporate agenda laws, in many cases nearly word for word from the ALEC draft model legislation. Laws that infringe on your Constitutional right to seek redress for grievances in a court of law in front of a jury of your peers. Among other things, these laws are designed to prevent you from suing a car dealership when they sell you a lemon or when a landlord (like Robin) decides to keep the security deposit for your college student’s apartment.


Robin Vos has been bribed with expenses paid ALEC “scholarships” to be wined and dined in a sunnier clime while being “educated” in the ALEC way. And Mr. Vos has been using his forked tongue ever since to sell their secret snake oil sauce on issues like tort reform, free market fundamentalism, voter fraud, the privilege to pollute and privatization for the fun and profit of the few. Don’t swallow this venomous brew, don’t even step in it!
Those ruled in the interests of others are not free. If you believe in America’s founding principles of freedom and self-determination, please watch The United States of ALEC documentary by the respected journalist Bill Moyers: http://www.democracynow.org/2012/9/27/the_united_states_of_alec_bill and demand an end to this traitorously secret legislative process.

Be a patriot, stop Robin the shill who represents global corporations that have no allegiance to you, your city, county, state or even your country. Vote for Democracy!
Posted by Sean Cranley at 10:48 AM No comments: 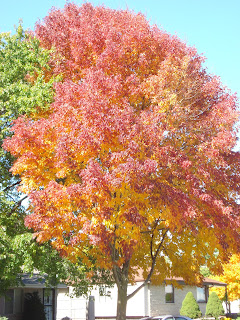 Take a good long look at the brilliant ash trees this fall. It will be among your last opportunities. Although their amazing colors don't last long and plummet with the the first wind or rain, they are among the most spectaular and unique of autumn shows. Ranging from bright, uniform yellows to shimmering, almost psychedelic dark purples to yellows, sometimes even on the same leaf, these beauties will be sorely missed as they vanish from our landscape in the coming years. The emerald ash borer is here and dispite our best efforts, nothing is going to stop it, the genie is out of the bottle. It just makes me very sad. Thanks a lot uncheched globalization.
Posted by Sean Cranley at 5:55 AM No comments: