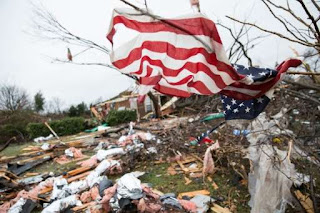 Call it karma, call it poetic justice, but I can't help but note that the 2015 Christmas distasters, driven by climate change enhanced El Nino have hit hardest in the southern states that repeatedly insist on voting for the Republicon Party, the party of anti-science zealots who's Purchased Politicians continue to deny the fact of global warming for fun and profit.

Maybe if they get hit over the head enough times by these events of ever increasing violence and frequency these voters will wake up and realize that they've been lied to and GOPropagandized with a crass and craven disregard for the safety and well being of their families, friends and neighbors. And then maybe, just MAYBE, they'll realize that if the GOPsters are willing to lie to them about something as crucial as the very future of our planet and our progeny they'll realize that there is literally nothing that they won't lie to them about if the payola is plentiful.

If we don't solve this problem and there's anyone left in the future to consider the history, today's Republicon Party will get a lion's (or should I say Lyin's) share of the blame!

Unfortunately, the disastrous effects are spread out far beyond Merica's Republicon Rubes!:
Deadly extreme weather on at least five continents is driven in large part by a record-breaking El Nino, but climate change is a likely booster too, experts said Monday.
Posted by Sean Cranley at 10:38 AM No comments:

In a Secret Ceremony, on the eve of the one year anniversary of the publication of the video version of my song The Badgered State Blues (12/17/14), Wrong Way Walker signed a bill dismantling Wisconsin's Non-Partisan Ethics and Elections Board, doubling the level of bribery allowed to our so call "Representatives" and making secret the economic interests of the Bribers.
How ironic and appropriately inappropriate and one more big reason to lament the systematic dismantling of our beloved Republics (state and federal) by our Plutocratic Rulers!
I was Proud to be a Wisco Kid you see
We were the Laboratory of Democracy
With Goodwill, Progress, a government Clean and Pure
But Corrupticons have come to Rule
With Felons and Cronies in a Big Cesspool
And I don't feel like I'm from here anymore.
Not from here anymore, not from here anymore
You can take the whole damn state and shove it right up . . you're
Gonna regret the stage you've set
Them chickens ain't back home roostin yet
and we don't feel like we're from here anymore

Goodbye Wisconsin!
Posted by Sean Cranley at 8:29 AM 1 comment: 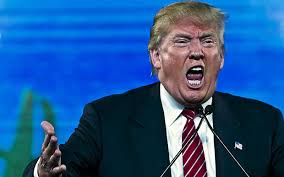 As his crazy crescendo crests (we hope) establishment Republicons are becoming increasingly alarmed that The Donald will thwart their attempt to yet again seize the Whitehouse. After all they can only flip so many electronic votes without it being obvious to the public at large, so it's got to at least be somewhat close next November.

But the GOPsters have no one to blame but themselves for their plight. They've spent years spewing GOPropaganda from their wingnut radio network and FuxSnooze. They've simultaneaously whipped up and dumbed down their base to make them more easily manipulated for fun and profit.

More recently they've repeatedly demonized our first black president, calling him a Muslim, questioning whether he's really Merican and insinuating to him all manner of "dark" intentions. Blatant racism is long out of style in most quarters, so they've been encouraging a more subtle version ever since Ronald Reagan launched his 1980 campaign in Philadelphia, Mississippi, the site of the murder of civil rights workers in 1964, Crying the Confederate Creed of "State's Rights!

We see this subtle racism today with the Republicon war on poor people and their attack on voting rights among many other fronts. The current "We Back the Badge" reaction to the "Black Lives Matter" movement is a prime example of this and a turning of a blind eye to an obvious history of racially based police abuses now be recorded on our phones as well as to the core American value of Justice for ALL!

In 2010 in the wake of the racially based Tea Party wave the Republicons, in a crass attack on representative democracy, you know Our Republic, Gerrymandered the entire country. In doing so they created a spider web of wingnut state legistative and congressional districts, where Trumpy Type Crazy Talk is not only tolerated it's applauded! Those districts have produced the most extreme rightwing "representatives" since the civil war, resulting an echo chamber where their most extreme, hate and fear filled constituents are ripe for the picking and ready to rally to the call "Mein Trumpf!"

Pall Ryand recently proclaimed this about Trump's call to Ban all Muslims:  "This is not conservatism," Ryan said at a news conference with House Republicans Tuesday. "What was proposed yesterday is not what this party stands for and, more importantly, it's not what this country stands for."

Once again our little Pally get's wrong, well mostly. While these cynical strains have always been a part of conservatism and the Republican Party, except for rare outbreaks (McCarthyism, WALKERISM) only a fringe element. Over the past 30 years the GOPsters have both intentionally and unitnentionally built these elements into a major component of today's radical "conservatism" and the Republicon Party.

The part our Ayn Rand worshipping House Speaker got right? "It's not what this country stands for." And therein lies their problem from the Fascist Frankenstein Monster of their own creation. It's about strangle them and their party.

It probably too late for this election. But it's long past time for the Republican Party to return to the American values that this country does stand for, or face generation Xile and be condemned to wander the wilderness. Republicons Repent!
Posted by Sean Cranley at 7:31 AM 1 comment: