New Pledge: I pledge allegiance to the corporations of the Transnational States of America,
and to the profits for which they stand, one nation, under Wall> Street, bought and paid for,
with liberty and justice for those who can afford it.
New Preamble: We the Corporations, in order to form a moreprofitable union, provide for the tort defense, promote the corporate welfareand secure the blessings of free-markets for our owners and our subsidiaries, doimpose and establish this Constitution on the United States of America.
If corprations are people then:
Why can't they be put in prison when they break the law?
Why can't they be given the death penalty when they murder people?
How come they're immortal?
How come they can be in multiple jurisdictions and even countries all at once?
Why didn't they go to my school so I could have a corporation as a friend?
Why can't they vote?Why don't they need a passport ot enter or leave the country?
Why aren't they counted in the Census? Isn't the census primarily about allocating representation to the PEOPLE? Am I missing something!?
How come they have different tax rates then say, oh I don't know, people?
If money is speech then:
Speech must be money,so how come they don't tax speech?
Why can't I put my speech in a CD and collect interest in my speech?
If I commit an infraction, how come I may have to forfeit my money, but not my speech?
Why can't I fold my speech up, keep it my wallet and get it out later when I need it?
Well at least we needn't fret about donating our hard earned money to candidates anymore. Why try to change the ocean with a dribble.I can't wait for a foreign corporation like Saudi Arabia's ARAMCO TO STARTPICKING THEiR REPRESENTATIVES IN OFFICES FROM DOG CATCHER TO PRESIDENT!
Posted by Sean Cranley at 11:10 AM No comments:

Welcome to the Ownership's Society 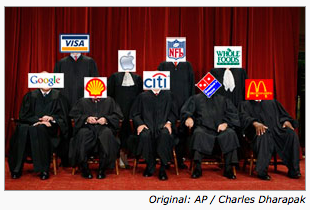 As the prescient Chief Justice of Wisconsin's Sumpreme Court said to the UW Law School graduates in 1873 on the the cusp of the last robber barron infested gilded age:
"[There] is looming up a new dark power . . . the enterprises of the country are aggregating vast corporate combinations of unexampled capital, boldly marching, not for economical conquests only, but for political power. . . The question will arise in your day, though perhaps not in mine, which shall rule - wealth or man; which shall lead - money or intellect; who shall fill public stations - educated and patriotic freemen, or the feudal serfs of corporate capital . . ."
Robert La Follette, Teddy Roosevelt and the progressives movement answered this call then saving democratic-representative governance. Chief Judicial Activist John "Benedist Arnold" Roberts and his corporatist collaborators on the Extreme Court Bench undid their efforts and 100 years of estblished law and precedent with one deep bow to their masters of the owenship society. Who will answer today in the hope of proving Frank Zappa wrong when he said:
"The illusion of freedom will continue as long as it's profitable to continue the illusion. At the point where the illusion becomes too expensive to maintain, they will just take down the scenery, pull back the curtains, and you will see the brick wall at the back of the theater."
Five corporate apointed Supreme Injustices just took down the scenery. Is the curtain next?
Chris Hedges has written an interesting and ominous article about the illusion of democray and the emergent inverted totalitiarianism. http://www.commondreams.org/view/2010/01/25
You're free to move about the country.
Warm Rememberances,
Sean Cranley - Corporate Serf No. 394-74-2812
Posted by Sean Cranley at 9:42 AM No comments:

NADA - Not A Democracy Anymore

Mike McCabe, Executive Direcor of the Wisconsin Democracy Campaign authored this statement on behalf of WDC regarding the recent traitorous and judicially activist supreme (Extreme) court ruling that has surpassed even bu$h v Gore in terms of audacity and damage to our democracy and the freedom of the American People http://www.wisdc.org/pr012110.php

Historically democracies have lasted about two hundred years or so before the plutocrats and feudal lords re-exert their control. Well America, it was nice while it lasted.

The narrowest of majorities on the U.S. Supreme Court legislated from the bench today, effectively enacting a radical vision of the First Amendment and a bastardized version of democracy that has never been approved by elected representatives of the American people and strays far from the ideals spelled out so elegantly by the nation’s founders.

The Court majority’s decision in Citizens United v. Federal Election Commission is a continuation of the judicial activism on election finance that began in earnest in the 1970s and substantially expands the scope of this policymaking by unelected and unaccountable judges for life.

Boiled down to its essence, five of the nine justices ruled that money is speech, corporations are people, public offices are commodities and elections are the marketplace where these commodities are bought and sold. The majority opinion asserts the appearance of big money influence over elections will not cause the public to lose confidence in the democratic process. The cluelessness demonstrated by such a declaration begs the question: What planet do these justices live on?

This ruling further chips away at both the letter and spirit of the federal McCain-Feingold law and favors the corrupt status quo in national politics. The five justices overlooked the corrupting effects of allowing massive sums of wealth to be brought to bear in election campaigns. Their ruling throws century-old law on the use of corporate and labor union treasury funds to influence elections on the scrap heap.

On the other hand, a super-majority of justices upheld the constitutionality of disclosing money spent on elections. This leaves the door open to meaningful disclosure reform at the federal and state levels.

Unaddressed in this case and untouched by today’s ruling are public financing programs like the one just enacted for state Supreme Court elections in Wisconsin. Such programs remain on sound constitutional footing and now become all the more important as one of the few remaining tools to guard against political corruption and ensure the voices of ordinary citizens are heard.

It is also important to note that this case involved a challenge to a federal law, not any state law in Wisconsin. However, today’s ruling does have state-law implications, which we will be assessing in the days and weeks to come.
Posted by Sean Cranley at 9:23 AM No comments:

An Open Letter to the President

Dear Barack --
While you have done many admirable things in the first year of your presidency, you're getting cooked in the media and by the Republicans because your accomplishments are not direct enough -- and, therefore, can't be explained in brief messages (of just a few words).
You need to re-concentrate your efforts on the 4 things you were elected to do -- and you need to do them in a way that you can explain in a simple phrase. (Not, "We removed the insurance companyies' ability to discriminate on pre-existing conditions," but "We created Medicare for all.")
The four things you were elected to do are:
1) Create Jobs
2) Fix Health Care
3) Save the Environment
4) End the War

One of the reasons we lost a Senate seat in MA was the lack of easily explainable progress in any of these areas.
There is no one in the country that thinks you have done any of these four things. Further, there is no one that can explain any of your accomplishments in these areas in simple, direct terms.
If you can't explain it in simple, direct terms, the American people won't buy it or believe it.
You need to redouble your efforts to take simple, direct action. You need to be courageous.
Presidents are remembered for their leadership -- not for their ability to be bi-partisan or reach amiable compromises.
You were elected to lead (not to compromise).

It's time to lead and address these issues directly.
Yours Sincerely - Steve Sullivan
Posted by Stephen D. Sullivan at 6:28 AM 2 comments:

I just sent this note to the Whitehouse as I wait for the results in Massachusetts.

I think he needs to get more letters like this.

I do not know the outcome of tonight's vote in Massachusetts.  I do know that I sent money and just spent the past hour phoning from Wisconsin to turn out the vote in my old home state.  I hope Martha will win, but the news does not look hopeful.

I do think I know what went wrong - not specifically with her campaign, but overall: You, the President (whom I worked so hard for) have not done enough.  You have not gone far enough with healthcare -- abandoning the Public Option or Single Payer off the bat.  You have not gone far enough in creating jobs, nor in punishing Wall Street for their failures, both in tending our money to begin with and in investing the bailout money in America rather than in enriching themselves.

In short, you have not pushed hard enough or been progressive enough.  You have been Jimmy Carter when we need another FDR.  You have compromised when the country needs you to LEAD.

It's time to wake up and LEAD the country, before there is no country left to lead and none left to follow you.

Please, stand up.  Be President.

Your Supporter (and former office runner),

Apparently the cartoonist (Mark Fiore) responsible for this brief educational video has received numerous death threats from the wingnutti. And he's not even Danish!

Dog! Thou shalt not insult the profit, Michelle Backman!

Perhaps the GoverNOTor Sarah Palincomparison, who as just announced will be the key-note speaker at the next two major teabaggings, has issued a Fatwah for the Teahadists to get this infidel!

Posted by Sean Cranley at 6:50 AM No comments: