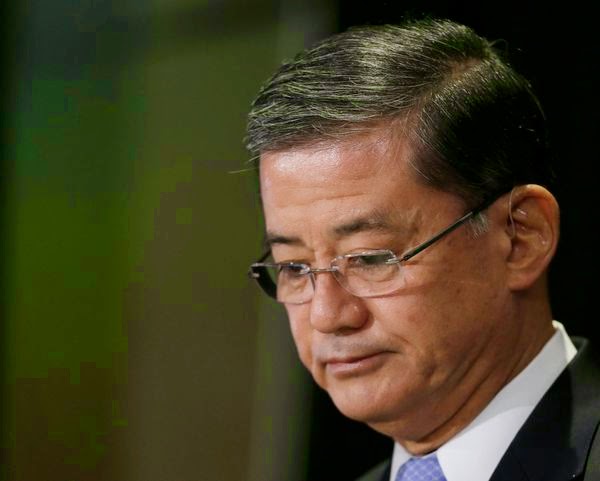 Getting rid of Shinseki, in typical DC fashion, is a do nothing non-solution designed to look like something is actually being done, when it's not. Nuthin up my sleeve, presto!

First of all I would point out that all of the major veterans organizations except one wanted Shinseki to be kept on the job. They ought to know.

Secondly, getting rid of Shinseki isn't going to help. We now have the new guy in charge, Sloan Gibson who may be a very good administrator, but he's only been with the VA for 4 months and therefore has a steep learning curve. One step backward.

But what is ironic about this is that Shinseki was undermined as Army Chief of Staff by Donald Rumsfeldt for telling the truth to the Senate Armed Service Committee that the 145,000 troops the Bush administration planned to send to Iraq would be inadequate to maintain order and that several hundred thousand troops would be required. He was of course proven right within a couple months when the shit hit the fan there with looting and an insurgency.

Now despite huge increases in funding for the VA under President Obama the VA is taxed with caring for the many tens of thousands of vets that were horribly injured in two expensive, off the books wars sold on lies by the Bush crowd, injuries that in many cases would have been fatal in previous conflicts, but which many survived due to advances in quickly and effectively caring for the injured in the field and getting them to a hospital. These are very challenging and expensive injuries to treat.

Do you remember when our troops started up-armoring their humvees in the field with whatever they could grab because they didn't yet have the parts needed to protect against road-side bombs? And Rummy said "you go to war with the army you have, not the one you wish you had. That jack-ass wasn't fired. But Shinseki once again falls victim by having the VA we have instead of the VA we wish we had and one that is swamped by the devastation caused by the bumblings of the worst president in American history, a fool who was completely in over his head and whose damage to our country Obama has had to contend with and fix from day one.

It's a shame, Shinseki, an honorable man and and servant of his country has once again fallen on his sword and once again, it won't help fix the things that are broken.
Posted by Sean Cranley at 4:32 AM No comments:

Money is not "Speech"!
Money is Amplification.

If I went down to the town square with a megaphone and drown out other people's voices, I would get arrested for disturbing the peace.

Citizens United is not Freedom it's a Drowning!

MOVE TO AMEND
Posted by Sean Cranley at 11:17 PM No comments:

We the Corporations, in order to form a more Perfect Corporatocracy . . . 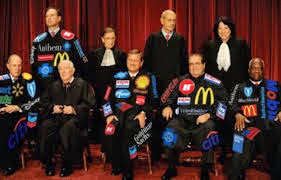 Thanks to the Roberts Court, Corporations have more Constitutional rights than Actual People!

This is why we're collecting signatures in Burlington.

We're on track to collect the signatures we need, but we've got to maintain the momentum and a couple hours of your time would help enormously. we're running two canvassing shifts this Saturday, 9:30-Noon and Noon to 2:30. We go out in pairs, it's easy like a walk in the park. Some folks are even coming from out of town to help us! Please sign up for shift and fight for our democracy.
Sign up here: http://salsa4.salsalabs.com/o/50961/p/dia/action3/common/public/?action_KEY=10882

More background info here: http://burlingtonareaprogressives.blogspot.com/2014/04/the-extreme-courts-citizens-united-is.html
Posted by Sean Cranley at 6:52 AM No comments:


I didn't write this song about the Republicons hatred of Obama. But with the GOPsters gearing up for another run at the Benghazi, Benghazi, Benghazi "scandal" the conversion of my rough audio recording into a video could not have been more timely.

I also feel I must point out that once again the Cult of Con is enraged and engaged in rank GOPocrisy. You see the equivalent of 13 Benghazi's occurred during Bushyboy's reign of error, without a peep from our elephantine friends. Four people were tragically killed during the Benghazi attack, while 13 attacks above killed 94! The Republicons could investigate these, but no.

Even better, the Reptilian Republicon Hatriots could investigate the Bushite War Criminals who lied us into the unprovoked attack on Iraq the resulted in the massive loss of blood and treasure with the death of over 4,000 (One Thousand Benghazis!) Americans and several hundred thousand Iraqis. But they're not interested in real justice, they just need to feed their fear and loathing of the black guy in the Whitehouse.

Recorded and produced by Scan Crinkley Studios
Posted by Sean Cranley at 9:05 AM No comments:

Move to Amend Kickoff a Success! 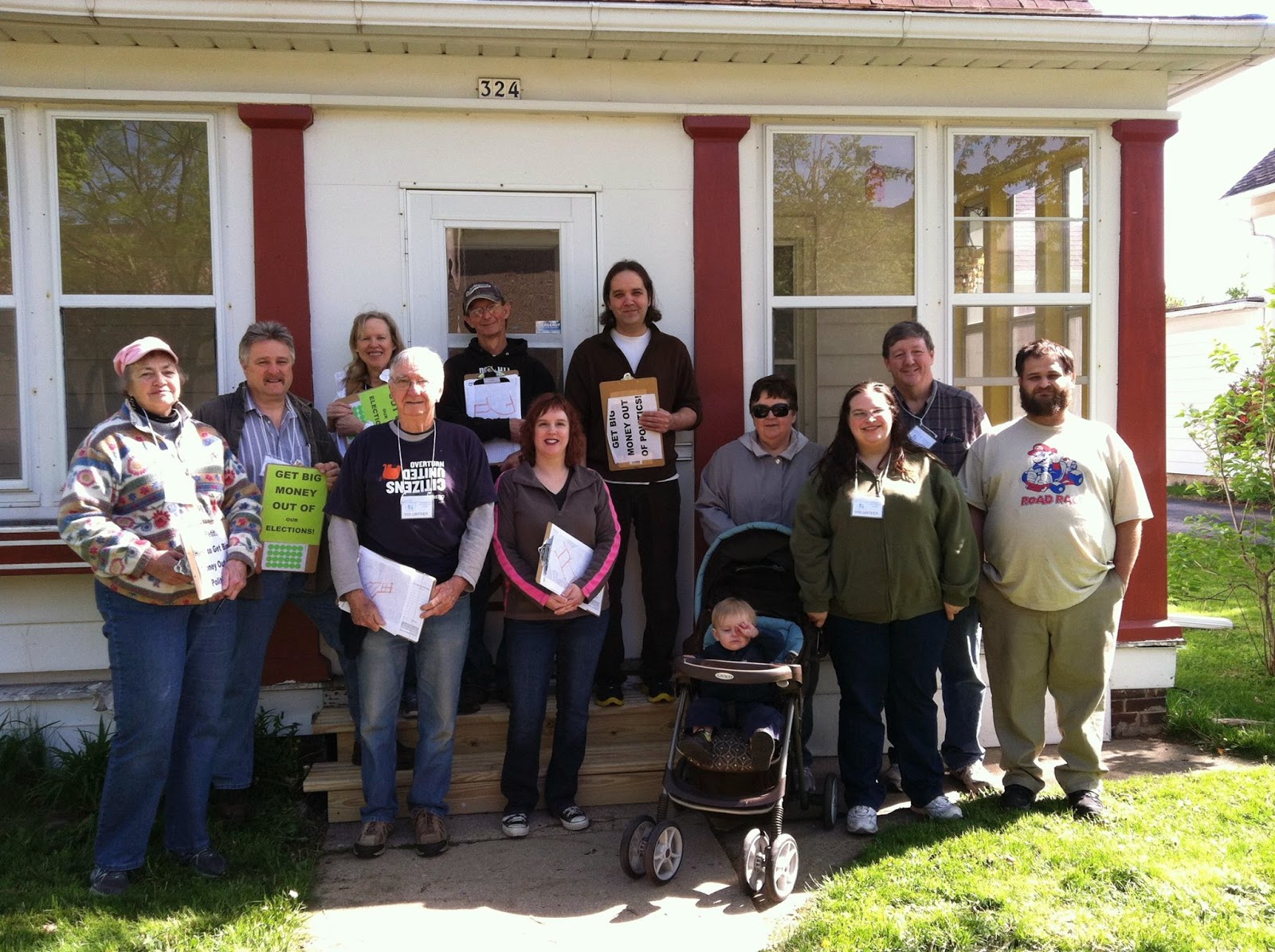 We got 82 signatures on Saturday for the kick off!

The Move to Amend effort is to place a referendum on the ballot this fall to push for the overturn of the anti-democratic Extreme Court's Citizens United decision!
Read more here: http://burlingtonareaprogressives.blogspot.com/2014/04/the-extreme-courts-citizens-united-is.html

This effort will continue until July 15th. We need about 700 signatures, which is totally doable. You can volunteer just about anytime, all the materials you need to collect signatures are available for pickup on the nice enclosed porch (pictured above). Canvass for just a couple hours of fresh air and exercise, cover a stationary event or just grab a petition and get the signatures of your friends and family.

Just contact me and I'll fill you in on what to do!

Tomorrow - Fight for Your Democracy!

Tomorrow (Saturday May 17th 2014) meet at 324 Amanda Street in Burlington to fight for democracy! 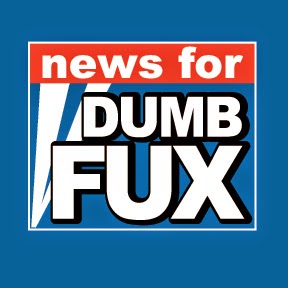 Many of you have no doubt seen the latest FuxSnooze generated "outrage" orbiting the interwebs (including the BAP Yahoo group), decrying that Mary Burke's Company hasn't paid state income tax in three decades. As it turns out, that's kinda like saying fish don't comb their hair.

Thanks to Steve Herr for clearing up the Fog of Fuxed Up Misinformation being passed along by the unwitting.

Steve Herr - "It only has to do with the form of taxation. Trek (like my own business) elected to go with what's called Subchapter S status.  What happens is the corporation computes it's income for the year, files an 1120S return at the federal level, (There's a similar form at the state level, the number escapes me at the moment) and then allocates that income to the shareholders based on each shareholder's percentage of ownership by filing K-1 forms, which report income to the IRS just like W-2 forms do for wages.

The shareholders then report the allocated K-1 income on their 1040 forms on Schedule E , line 28, and add it to the income they get taxed on.

This only applies to closely held corporations (there's a limit on the number of shareholders).

So yes, Fox News is technically correct - Trek has not paid income tax.  BUT TREK IS NOT SUPPOSED TO UNDER SUB S, THE SHAREHOLDERS PAY IT!!!!

It's just a smear on Fox New's part, probably fed to them by Walker's campaign."
Posted by Sean Cranley at 12:28 PM No comments:

May 17th - Act to Overturn Citizens United - Your Democracy Depends on YOU!


Remember that corporation that sat next to you in 3rd grade? No? How about that time you opened your mouth to speak and dollars came out? Yeah, me neither.

Yet your would be Rulers would have you believe that corporations are people and money is speech, because those are the tools of the moneyed aristocracy to rule over the once Sovereign Citizens of the United States of America.

"I hope we shall crush in its birth the aristocracy of our moneyed corporations which dare already to challenge our government to a trial by strength, and bid defiance to the laws of our country." - Thomas Jefferson

"The end of democracy and the defeat of the American revolution will occur when government falls into the hands of the lending institutions and moneyed incorporations." - Thomas Jefferson

In response to Federal Judge Lynn Adelson's ruling Tuesday that Wisconsin's Voter Suppression law is Unconstitutional, because it Suppresses Voters, the fALEC Gerrymanderer Robin "Vulture" Vos stated; "I'm going to do whatever it takes to ensure that we have voter ID in place as quickly as possible," . . . "If that means having a special session so we have it in place by the fall then I'm definitely open to doing that, and I support it. If it means that because of Judge Adelman's actions that won't actually occur then we will do whatever we can in the most expeditious manner to make it work."

Special session you say Vossy to pick at the carcass of democracy?