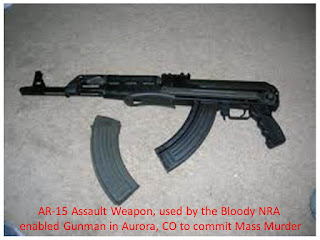 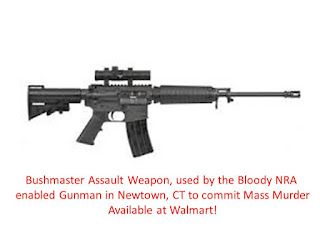 I'm just updating a post to the BAP blog from July 20, 2012, for crying out loud. Literally! Please, I don't want to have to ever do this again, again.
http://burlingtonareaprogressives.blogspot.com/2012/07/ban-weapons-of-mass-murder-again.html

When will we outlaw weapons of mass murder like the AR - 15 Bushmaster and the high capacity magazine used by the mass murderer du jour in Aurora, CO Newtown, CT? Oh yeah, we already did it was called the Assault Weapons Ban, but the Republicons gleefully let it expire in 2004 as required by their puppet masters, the Bloody NRA.

I'm not against people having guns, but high powered, highly concealable guns with high capacity, easily interchangeable magazine clips that allowed the Virginia Tech mass murderer to spray 170 rounds in 5 minutes are not weapons of sport or self-defense. The only thing they are good for is mass murder, no one needs one and no one should have one, let alone Four three!

For crying out loud, give us a chance, at least make'em have to RELOAD!
Posted by Sean Cranley at 11:13 AM 3 comments:

Student Achievement - It's the Poverty Stupid! 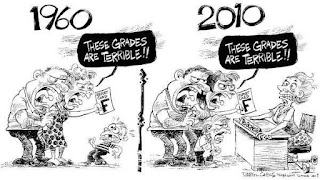 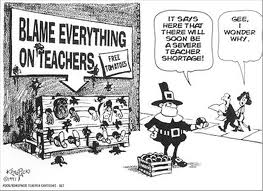 I've been having a running "discussion" (AGAIN!)  with some Cult of Con Indoctrinants over at
http://freeracine.blogspot.com/ who insist on blaming Racine Unified (where I was educated, thank you!) generally and the teachers specifically for the poor student achievement. They think doing away with RUSD is the answer. I have been arguing, as I have in the past, that if one only looks at where these types outcomes prevail, it is pattently obvious that it is the result of concentrated poverty and all the social ills that go with it. Well that doesn't fit with the Cons Pre-Set Blame & Belief Buttons, so they will hear none of it.

As it happens I was listening to Wisconsin Public Radio (one of our crown jewels!) the other day and what do I hear? The Forward Institute has just released a study that shows School Report Card scores issued by the Department of Public Instruction are closely linked with poverty (Who Knew!). AND that Wisconsin's public schools out perform charter schools even when adjusting for the poverty of the students. http://forwardinstitutewi.org/ Take THAT would be Educational Profiteers!

Of course in true Con fashion and unable to address the substance of the study, they immediately attacked the source. But I suppose some must close their minds to "conserve" what's in there.

Press Release Excerpt: Currently more than 4 in 10 school age children in Wisconsin are defined as poor or “economically disadvantaged,” up from about 2 in 10 a decade ago. A student from a family qualifying for “free or reduced price lunch” is considered economically disadvantaged for the purposes of DPI scores – over 350,000 children in Wisconsin schools.

Based on data from the new Department of Public Instruction (DPI) Report Cards, our study showed a clear link between low Report Card scores and economically disadvantaged students who already have significant barriers to educational prosperity. Those schools with higher numbers of economically disadvantaged students had significantly lower scores on the Report Cards.
The study results show that nearly half of the Report Card score variation from school to school can be explained by the variation in poverty levels from school to school.

Since higher enrollments of economically disadvantaged students are a significant factor in the scores on the DPI Report Card, current proposals to tie school funding and teachers’ salaries to Report Card scores would unfairly punish schools in high poverty districts. As the study clearly shows, a very significant factor affecting Report Card scores is poverty, something which is outside the control of teachers and schools.

The data also revealed that contrary to the assumptions that non-traditional charter schools would be more effective through creating competitive choice, Wisconsin’s public schools significantly outperformed charter schools overall. This finding was especially evident in those schools with high poverty enrollment.

These findings are important, especially as policy makers look for ways to provide the best educational opportunities for Wisconsin’s children while being mindful of the economic burdens on struggling families. Based on the high rate of Wisconsin school children living in poverty and the clear effects of poverty on education, this study recommends policymakers enhance educational opportunities for our children, and save taxpayer money by redirecting educational funds to the schools most effective at meeting the current needs of Wisconsin children, Wisconsin’s public schools.
Posted by Sean Cranley at 6:28 AM 1 comment: