So Sen. Von Zipperer (R-Peewaukee), right before pointing to his forehead and freezing his little FALEC brain said; “Any constituent, or anybody in the state…if there’s an individual with a legal right to vote, have them contact me or my office and I will make sure they get properly registered and have an ID,”. “If you know any individual, bring them to my attention. Even if they don’t live in the 33rd Senate District, I’ll get them to the office of their senator.”

So did, I called and I spoke with one of Von Zipperer's staff members and explained my Grandparent's situation and disenfranchisement.

I asked if they are they going to need to go to the DMV and he said yes. I asked how that was going resolve the problem and he said he didn't know.

I said that some people who are in wheel chairs or have other disabilities need specialized transportation, would the senators be making arrangements and paying for that? He said he didn't know.

Empty words, hollow promises and no thought, planning, compassion or consideration given to the problem.

I love the comment made to Von Zipperer by one of his constituents: Resident Emil Glodoski hammered Zipperer for his support of the bill, saying it’s racist and is aimed at suppressing votes. He told the senator the number of people who have actually been caught in the state perpetrating vote fraud wouldn’t even “fill a basketball roster,” yet the number of people who will have their votes suppressed would “fill the Bradley Center two or three times.”

“That’s voter suppression and it moves us into 'Wississippi,'” he said. “(T)his is the first time we’re eliminating voters rights and it’s just racist.”

By the way, I've turned this little tidbit over to Disability Rights Wisconsin and they said they would get the word out to the disability community to contact his office. You bet they will!

Judicial Hacktivist Michael Gabbleman was elected under a cloud of lying and ethical violations, which he was found guilt of in a court of law, but which his fellow nutbags on Wisconsin's Extreme Court let him get away with in a 3/3 tie. I know state FALEC Chairman Robbin Vos must be in agreement on thsi one as meets his proposed revised criteria for grounds for recall, right?

Now some are calling for his recall along with Gubnah Snott Wanker: http://www.expressmilwaukee.com/article-15786-after-the-recalls-whats-next-for-democrats.html

I agree, let's get this injudicious shithead off the bench. Gathering signitures for his recall while already collecting them for Wanker's recall is a miniscule additional effort.

But why stop there? Annette Ziegler is another extremist ideologue who doesn't have the ethics to know that she should recuse herself when her husband's business come before her in court. Let's purge her ass too while we're at it.

Then perhaps in a year we can get rid of Prosser, Extreme Court Strangler.

Remember 150,000 motivated protesters at the Capitol in March need only 3 signatures on the petitions, plus their own for 600,000 names, more than enough!

Posted by Sean Cranley at 11:43 AM No comments:

Gubnah Wanker WILL be Recalled, then Forgotten

In Ohio Gubnah Kasich forced through un-American, anti-union, anti-right of assembly, anti-right to petition legislation from the Fascist American Legislative Exchange Council - FALEC that is almost identical to the FALEC legislation pased by Gubnah Wanker in Wisconsin. People in Ohio took to the street and flooded the capitol in protest like in Wisconsin, but the Gubnah didn't care about the people, he was more invested in serving his FALEC masters. For more information on FALEC, see this link: http://www.alecexposed.org/wiki/ALEC_Exposed

With 11.5 million citizens, Ohio has roughly twice the population of Wisconsin. In response, the good people of Ohio easily gathered 1.3 million signatures to force a referendum to over turn the FALEC law, which is expected to to win by a two to one margin. Kasich has now come begging to the unions to negotiate, which he refused to do when the shoe was on the other foot and the unions where willing to talk. In resonse the unions have now told the FALEC member to fuck off.
In Wisconsin we need 500,000 signatures, less than half of what was needed in Ohio, to force a recall of the exposed FALEC member Snott the Wanker who is also now trying to pretend to play nice. Fuck off Wanker, you're going down along with your 60% dsisapproval rating. There's WAY more energy in Wisconsin to flush your a$$ than there is in Ohio to castrate the thier FALEC law and ensure it never takes effect.

It's bad enough to have FALEC legislation shoved down our throats for the gratification of the corporatists, Americans For Plutocracy (AFP) and the Wisconsin Club for Growths, but it is totally unacceptable to for Wisconsin to represented by an A$$hole. And Wanker is surely that.

If every one of the 150,000 people that showed up in Madison that glorious gets only 4 signatures that's enough, 5 and it's guaranteed, 10 and it's a breeze. Wanker, you're a dick and you're going DOWN!
Posted by Sean Cranley at 6:13 AM 2 comments:

Warren Buffett asks where is the shared sacrifice from the super rich and calls for increased taxes on the wealthy to help put our fiscal house back in order, like it used to be when we could pay our bills and created many more jobs: http://www.nytimes.com/2011/08/15/opinion/stop-coddling-the-super-rich.html

EXCERPTS: While the poor and middle class fight for us in Afghanistan, and while most Americans struggle to make ends meet, we mega-rich continue to get our extraordinary tax breaks. Some of us are investment managers who earn billions from our daily labors but are allowed to classify our income as “carried interest,” thereby getting a bargain 15 percent tax rate.

Last year my federal tax bill — the income tax I paid, as well as payroll taxes paid by me and on my behalf — was $6,938,744. That sounds like a lot of money. But what I paid was only 17.4 percent of my taxable income — and that’s actually a lower percentage than was paid by any of the other 20 people in our office. Their tax burdens ranged from 33 percent to 41 percent and averaged 36 percent.

I have worked with investors for 60 years and I have yet to see anyone — not even when capital gains rates were 39.9 percent in 1976-77 — shy away from a sensible investment because of the tax rate on the potential gain. People invest to make money, and potential taxes have never scared them off. And to those who argue that higher rates hurt job creation, I would note that a net of nearly 40 million jobs were added between 1980 and 2000. You know what’s happened since then: lower tax rates and far lower job creation.

The taxes I refer to here include only federal income tax, but you can be sure that any payroll tax for the 400 was inconsequential compared to income. In fact, 88 of the 400 in 2008 reported no wages at all, though every one of them reported capital gains. Some of my brethren may shun work but they all like to invest. (I can relate to that.)
Posted by Sean Cranley at 5:40 AM No comments: 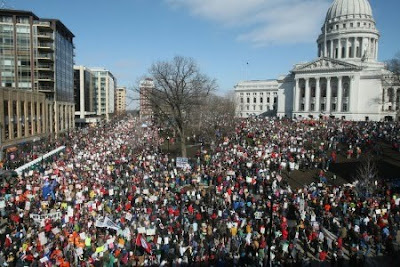 The latest factual rotations from the GOPsters is that because we only stripped them of two Senators, that the wind is out of the sails on the recall of Gubner Wanker and that getting the 700,000 signatures necessary in 60 days (11,667 signatures/day) to force a recall election is too heavy a lift. Pure unadulterated nonsense!

I was in Madison that amazing day along with 150,000 other massively motivated Wisconsinites. If everyone of those people just gets 5 signatures that's 750,000, more than enough with cushion for challenges. If everyone gets 10, that's 1.5 MILLION!

The Wanker WILL be recalled!

Posted by Sean Cranley at 9:58 AM No comments:

The Koch fueled Teabagger Express will be at the Birchwood Grill 7515 - 125th Ave. this Saturday (8/6) 2:30-4:00. Let's overwhelm them with our spirit like we did when they "graced" the Brat Stop, just across the street last spring. http://www.teapartyexpress.org/

"Restoring Common Sense Tour" That IS hilarious!
Posted by Sean Cranley at 9:19 AM No comments:

What Kind of Madman Would Blowup a Balloon!?

Further proof that Republicons are A$$holes, it's just that simple: http://www.journaltimes.com/news/local/state-and-regional/article_df0b334a-bea6-11e0-9cac-001cc4c03286.html
Posted by Sean Cranley at 9:53 AM No comments: