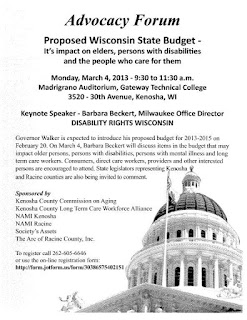 A Budget is an expression of Moral Values or the lack thereof. Monday March 4th 9:30-11:30, Gateway Tech - Madrigrano Auditorium, 3520 - 30th Avenue Kenosha. Come hear a discussion of the impacts of Walker's proposed budget on our elderly, our disabled and those who care for them.
Posted by Sean Cranley at 7:32 AM No comments:

Wealth is Like Helium, it Stagnates at the Ceilium! We often hear money and wealth compared to the physical properties of water. Money is "Currency" it has "Liquidity" or can be "Frozen". We have cash "Flow", we "Pump" or "Pour" money into things, markets get "Flooded", we spend it like "Water", "Float" loans and get "Drained" until we've taken a "Bath", are "Underwater" and have no "Solvency". We even store it in "Banks"! And yes, despite 30 years of evidence to the contrary, there are still those foolish enough to believe that if we allow enough wealth to accumulate at the very top, it will "Trickle" down on to us. Yew!

There is a reason why the failed Trickle Down metaphor of Supply Side Reaganomics is more like Voo Doo than Physics. Because when it comes to wealth accumulation, money isn't like water at all. Money is like HELIUM!

Water seeks its own level, the lowest level possible. But wealth naturally gravitates upward like helium. Left to its own devices, most of the wealth in any society will accumulate at the top, from which point the concentration will drop precipitously as one looks downward toward the bottom, where it will exhibit a vanishingly diffuse presence. They say it takes money to make money and it's true. So if you ain't got much money, you'll never make much money, unless you're the rarity that defies the physics and performs the feat that's called "Beating the Odds".

Helium released into a room will float up to the ceiling and stop there. On its own helium has no impetus to move back downward, other than the very weak force of diffusion along concentration gradients. Similarly, wealth concentrated in the top strata has no reason to move downward from the ceiling and since there is vanishingly little wealth below, there's no force to generate any dynamism in the system. And there's certainly no impulse for wealth at the top to invest itself in the interest of gaining more wealth from below, there's simply not enough of it there to make it worthwhile and generate the energy to do so.

Wealth is like Helium, it Stagnates at the Ceilium! (I've just renewed my poetic license). By September 2008, after three decades of Reaganomics, this was the state our Plutonomy had finally come to, with the vast majority of wealth concentrated at the top, the circulation collapsed, resulting in the Great Republicon Recession.

If however, instead of settling for stagnation, a force is introduced to push that helium downward, like a ceiling fan, it gets distributed more evenly throughout the room and inevitably returns to the top through dynamic flow and its property of buoyancy. Similarly, money circulated downward ($9.00 Minimum Wage, Revitalizing our Infrastructure, etc.) will flow back upward as it is used for purchasing. And unlike helium wealth can grow, so now there is momentum to invest that money to attract some of the wealth from below, which is now in more plentiful supply. And so the strength and volume of the circulation grows. And that circulation my friends, is called an "ECONOMY"!
Posted by Sean Cranley at 10:30 AM 3 comments:

Below is a link to Fact Sheet on Special Education Vultures from Disability Rights Wisconsin. See what a disaster these Vultures have caused in other states. Don't let them infest our state and feed off our our public schools!
http://www.wi-bpdd.org/whoweare/bpdd2013legpolicy/School%20Vouchers%202013.pdf

Tell Governor Walker not to stand for segregation of disabled students and the Education Profiteers supported by the self-serving owners of Walmart and Amway (the Walton and DeVos families) and their wholly owned legislature at the fascist American Legislative Exchange Council (fALEC). 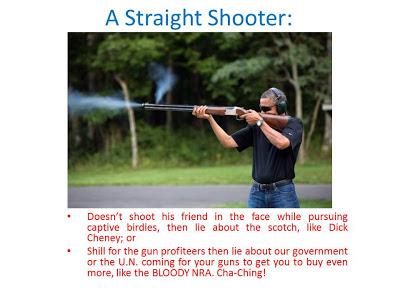 Posted by Sean Cranley at 10:54 AM No comments: