John Heckenlively penned this parody of Roy Orbison's Crying back in 2010and asked me to record it. I was about to dust off the mp3 file in response to Lyin' Paul Ryan's selection as Mit-the-Twit's VP, when I got a link from John to the video he'd just finished. I'm no Roy Orbison with an 8 octave range, but here after long delay is Ryan Lying.

Posted by Sean Cranley at 6:07 AM No comments: 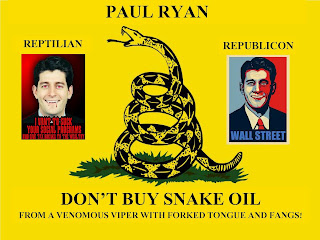 Scott Walker to Speak in Climate of Denial

One of the best known living liars rides to the rescue of those who lie for a living. August 9th Scott Walker who professional GOPropagandist Joe Bast describes as “the nation’s most influential and successful governor.” will speak at a $150 per plate fundraiser in Chicago to celebrate the 28th anniversary of the Heartland Institute. By my estimation that means that if he speaks for 45 minutes the attendees will have paid $3.33 per lie!

The fundraiser is necessary due to the drop off of donors who objected to Heartland billboards that compared people who accept the mainstream science of human-induced climate change to the unibomber. but what do expect from scumbaggy shills like Heartland and Scott Walker?
http://www.motherjones.com/blue-marble/2012/06/heartland-institute-and-scott-walker-join-forces

In case you're not familiar with the Heartland Institute, they are the Chicago based PR-opaganda firm that for years worked for the tobacco industry to deny and sow doubt in the minds of the American public that cigarettes cause cancer. Of course we all now know without question that cigs cause malignancy.

These days the Heartland Institute is on the payroll of the fossil industries and is one of the major merchants of doubt in the malignancy that is climate change denial. They also dabble in promoting the conversion of our children into perpetual revenue streams for the education profiteers and in bashing and scapegoating our teachers to advance their corporatist "free-market" (yeah, right) anti worker agenda. In light of the above it won't surprise you that the Heartland Inst. is tied to the "free-market", I mean fascist American Legislative Exchange Council (fALEC) where global corporations secretly write and vote on the laws that will rule you from your statehouse.

You can learn more about these shit heads and how they're literally making it their business to run ourlives, including right in in Wisconsin by following this link: http://www.sourcewatch.org/index.php?title=Heartland_Institute

SOURCEWATCH EXCERPT: Leaked documents show that the Hearland-Institute is planning to spend $612,000 supporting Wisconsin Governor Scott Walker and four GOP Senators in their probable recall elections in a pro-Walker campaign they are calling “Operation Angry Badger.”
In the leaked documents Heartland wrote: "The recall elections of 2012 amount to a referenda on collective bargaining reform at the state level, making them of national interest. Successful recalls would be a major setback to the national effort to rein in public-sector compensation and union power." The documents propose a $612,000 campaign to include print ads, mailers, web ads, and blog posts that would promote the "successes" of Wisconsin Act 10 and portray Wisconsin teachers as overpaid and schools as underperforming.

Can you say "quid pro quo" Scotty? One again we witness Scot Walker's uncanny and scummy ability to be on the big money-driven, immoral, unethical and un-American side of every issue he touches! But then we already knew that Walker is up sainthood among the money-god-worshippers in the Cult of Con.
Posted by Sean Cranley at 8:32 AM No comments: