Justice, Ferguson and Beyond 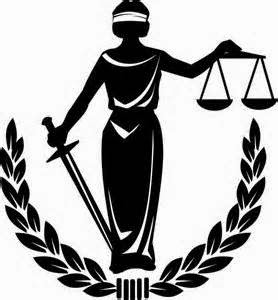 Judging by the on-line response to the decision of the Ferguson grand jury not to indict the officer that shot Micheal Brown, what I'm about to say may not be popular with some, but here it is anyway.
As I understand it, there were contradictory accounts of what happened from witnesses near the scene and therefore what occurred in this tragedy is not completely clear. In order to have justice, you must have actual evidence that a crime was committed that will stand up in a court of law before you can bring charges against someone. It's not clear to me that this standard has been met.
Is there a problem in this country with police militarization and with police shootings, especially with regard to minorities? Yes. Are minorities in general targeted for law enforcement and prosecution at far higher rates and more punatively than white communities and law breakers? Definitely, the evidence is overwhelming. One only need look at the fact that whites use illegal drugs at slightly higher rates than blacks, yet blacks suffer arrest and incarceration at far higher rates for such crimes and for longer terms. Do people have a right to be outraged? Absolutely, not only a right, but I would argue, a duty.
But right now emotions are running high. And to demand that the officer in Ferguson specifically, be offered up as some kind of sacrificial lamb to in some way satisfy the rightful outrage of many (myself included) at the conditions of our criminal "justice" sytem generally, without the evidence to back it up? That would just add to the injustice and the tragegy that has already occurred.
If I'm wrong about the nature of the evidence or new shit comes to light, I'll reconsider my position and if it appears that the officer committed a crime he should be prosecuted accordingly. But until then I'm going to continue my position opposing lynching.
Posted by Sean Cranley at 6:34 AM 4 comments:


Can we please get this kook off the Burlington School Board!? Replace him with another conservative even, just as long as it's a rational human being and not a Whacky conspiracy theorist. If I was a local conservative, this Klown would embarrass bejeezzes outta me!

On page four of the November 20, 2014 edition of the Standard Press is an article headlined "Board member fears proposed course propagates UN agenda. I needn't have read the article to know which board member.

In question was the proposed edition of an advanced placement (AP) class in Human Geography at Burlington High School. Board member Phil Ketterhagen stated that the class could be "programming" future generations and that the proposed curriculum and samples align with the United Nations Agenda 21. Ketterhagen stated that Agenda 21 is a talking point for conservativve leaders such as Glenn Beck. GLENN BECK!? Yes, Glenn Beck who is a Serial Conspiratorialist and is too ridiculously Batshit Crazy even for FuxSnooze!

"As I said this week, having one of the Bucks new owners go and greet Barack Obama on the tarmac in the middle of the Mary Burke campaign probably wasn’t the wisest decision," - Vos

"Representative" Vos showed his true scales when he assaulted the freedom of conscience of one of the owners of the Milwaukee Bucks and demonstrated his penchant for cronyism, this time in reverse. He also exposed his fangs with the never very thinly veiled disdain he and his "caucus" from around the state hold for Wisconsin's urban centers and the folks that live there generally and for Milwaukee specifically.

Whatever your position on funding for a new stadium for the team, or any other decision regarding the use of public funds for private purposes, the decision should be made on it's merits for the general welfare and NOT on the political positions of an American citizen, their ability to produce political payola or which party is the recipient. In fact it is against state corruption laws for Vos to do so!

But as we've seen repeatedly, that is not how the VOS / Valker Republicons who now rule the Badgered State roll when it comes to things like the corrupt WEDC and G-Tack's Walker directed bribery to the Wisconsin Club for Growths during the recall campaign in order to get their iron mine rammed through. That is how "business" is now conducted in what was once America's shining example of good governance, fair play and transparency. My once strong faith in the good sense and goodwill of the people of Wisconsin has been sorely shaken by the continued re-election of extreme, corrupt, slick-slithering and ill-willed career politicians like Robin Vos and his ilk.

Therefore, for the the @$$Oli$h exhibition of ill-liberal, venomous ill-will and disdain for representative democracy above and beyond the call of duty, the Gerrymanderer Vos is hereby awarded BAP's Forked Tongue and Fangs Award. FREEDUMB!

Posted by Sean Cranley at 1:10 PM No comments:

The GOPsters not only hate democracy, they're @$$HOs. I placed 4 campaign signs here several weeks ago at the request of the property owner. A couple weeks later some angry old jerk and thief in a big truck (you can see the tire tracks) ran them over and stole the Mary Burke and Susan Happ signs. The Andy Mitchell and Rob Zerban signs survived. 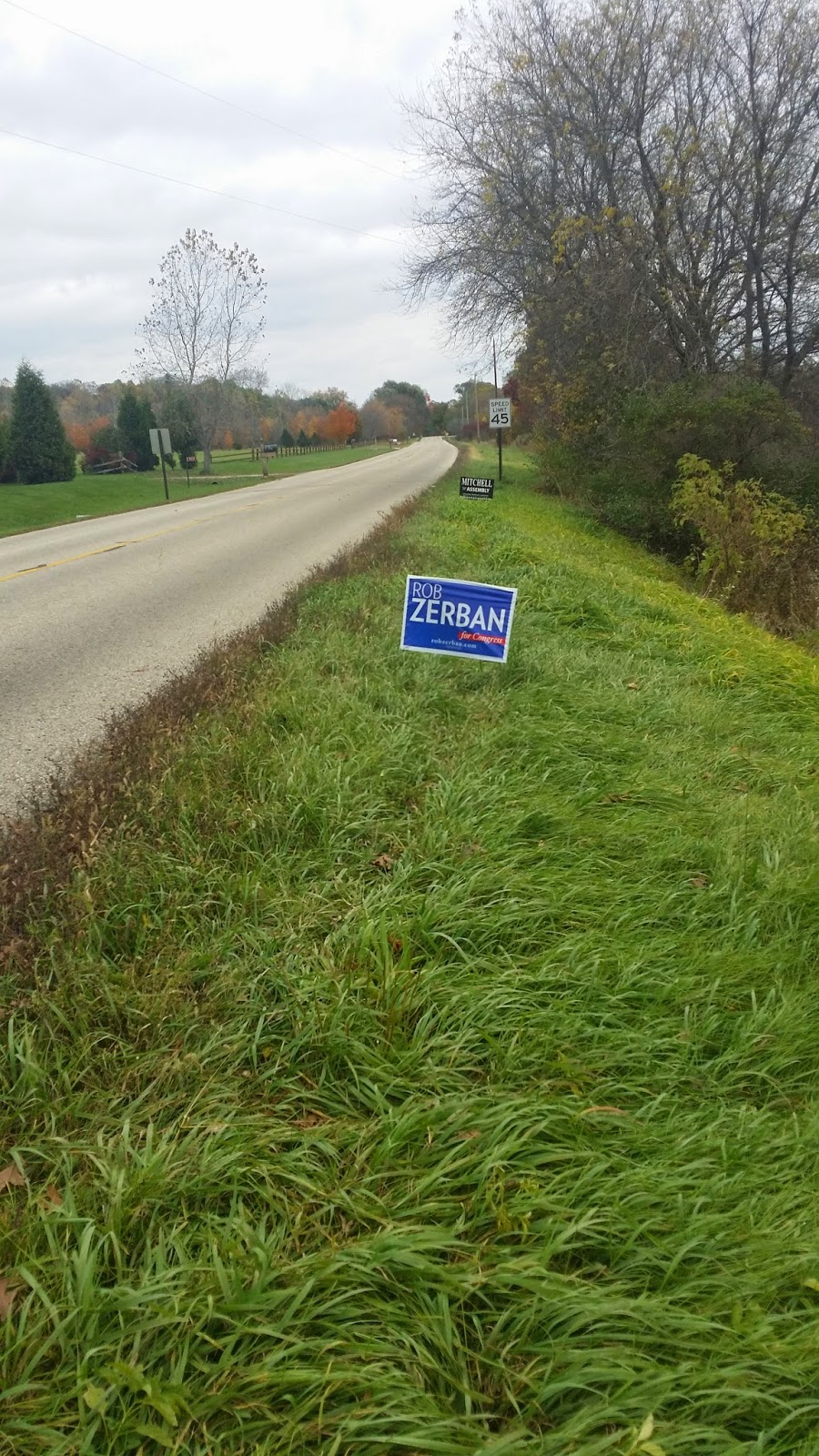 I replaced the stolen signs. Mind you, there are Pall Ryand (@$$hO) signs on this stretch of road, there are Walker/Kleefisch (complete @$$HO/Shirley Temple's Evil Twin) signs. All of which have been there unmolested for a couple months. Then when I went past today I found this: 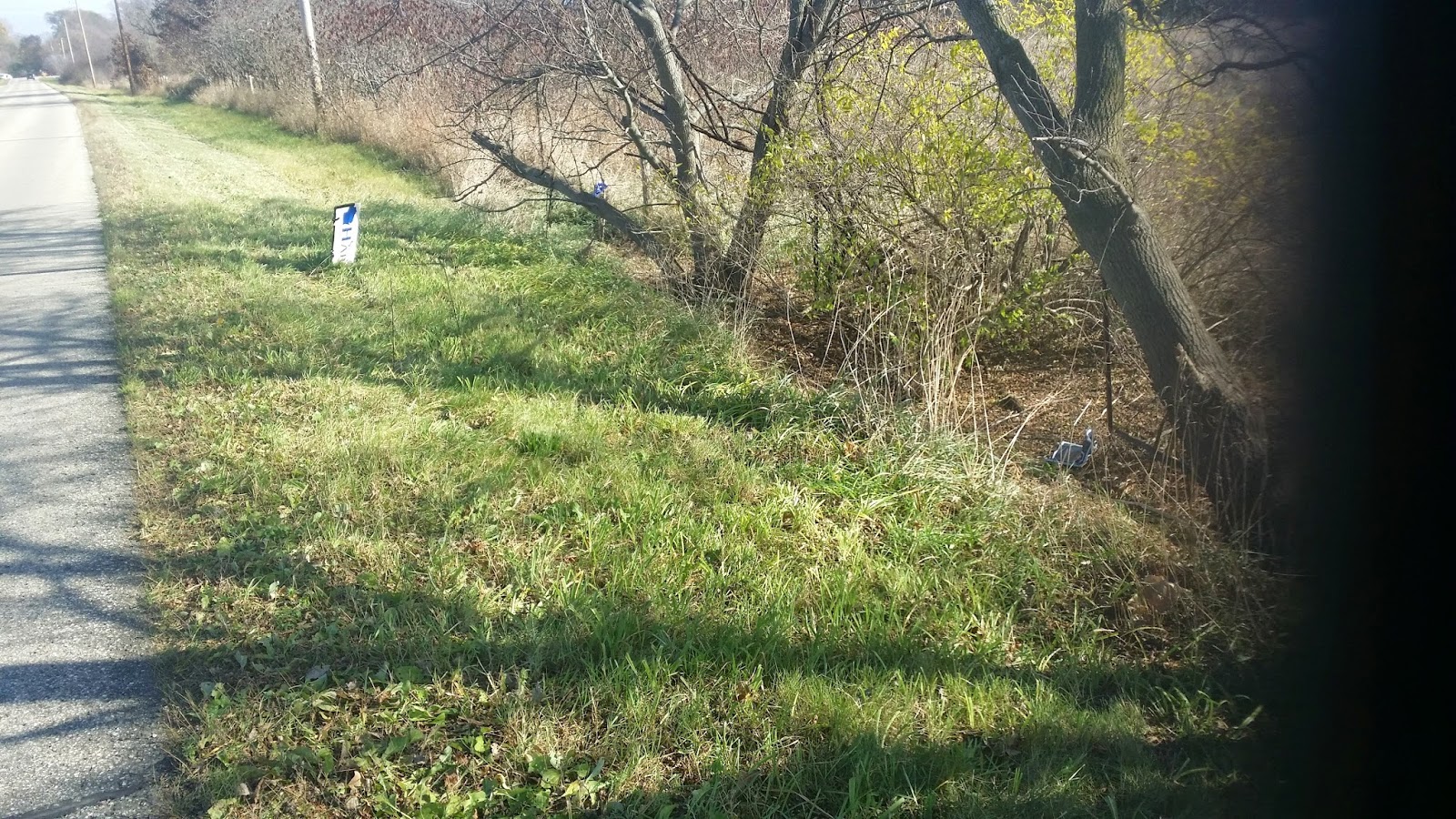 Can't do it can you?