First we saw that American Majority, a national group funded by the Koch Bros was training Tea Party candidates for the Burlington School Board.

Then we saw that the fascist American Legislative Exchange Council (fALEC), also a Koch supported group is also going to insert itself into local elected officials across the country.

And now we see that the national group Americans for Plutocracy, also funded by the Koch Bros has injected itself into the Kenosha Unified school board race, because the existing board had not used Gubnah Walker's divide & conquer "Tools" to sufficiently punish the public school teachers.

Just connecting the dots . . . or should I say suction pads?

Americans for Plutocracy, fALEC and Merican Majority, all tentacles of the Koch Bros Plutoctopus and all worming their way to strangle your local control and shroud your democracy in an inky cloud. Because Republicons no longer believe in local control. They only believe in CONTROL!
Posted by Sean Cranley at 2:08 PM No comments: 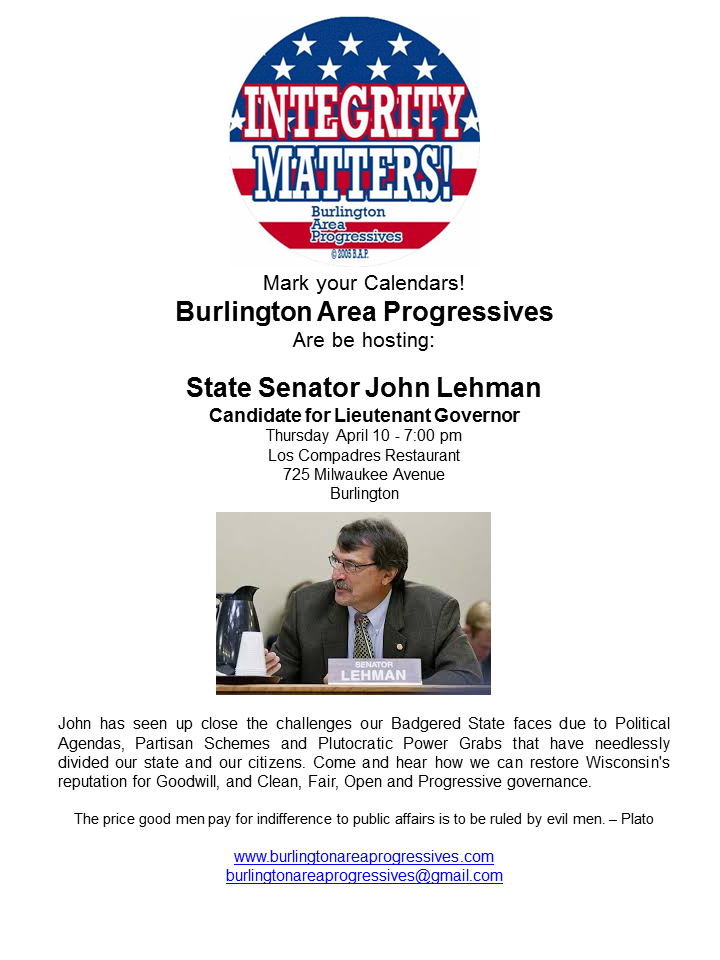 
John has seen up close the challenges our Badgered State faces due to Political Agendas, Partisan Schemes and Plutocratic Power Grabs that have needlessly divided our state and our citizens. Come and hear how we can restore Wisconsin's reputation for Goodwill, and Clean, Fair, Open and Progressive governance.

The price good men pay for indifference to public affairs is to be ruled by evil men. – Plato
www.burlingtonareaprogressives.com


burlingtonareaprogressives@gmail.com
Posted by Sean Cranley at 12:02 PM No comments:

Short Changed on Freedom of Speech

Attention American Consumers!
You are yet permitted to move about the confines of this country consuming. Meanwhile, the Extreme Court anointed $upercitizens will exercise self-determination over their Dominion on behalf of themselves as a service for you all. You're welcome, don't mention it.

Please note that the pasture beneficently afforded you by your Rulers for your consumption, stretches from sea to shining sea and from the Great Lakes to the Rio Grande. Know your place, go forth and shoptill you drop! And if you'd like to exercise your "Freedom speech" in our Fiefdom, rest assured you've been "herd". Resistance is Feudal.

The Fascist Five Judicial Hacktivists on the Extreme Court have now emphatically confirmed what they are.

First there was the over-reach of the Citizens United decision for which Chief Injustice Roberts went beyond what was necessary to simply decide the case at hand and expanded the scope in order to achieve his Plutocratic Political Goals. Not prudent, not Judgely Dude!

That Legislating From the Bench Betrayal of Representative Democracy opened the flood gates of Anonymous Money from Billionaires and Corporate "Persons" to swamp democracy. Although the likely result is that the Stinking Plutocrats probably won't even have to spend all that much of their Precious Money. After making examples of a few of their Wayward Vassals, the mere threat of wielding their Royal Money Scepter as a weapon against our "Representatives" will be more than sufficient to make them hew to the path demanded by their Feudal Lords.

Then came Wednesday's Atrocity against Democracy, the McCutcheon decision which doubled down on the previous Demonstration of Fealty by ensuring that our Rulers will be able to Purchase Politicians in Bulk. After all, Economies of Scale is practically the Capitalist's Prime directive!

Read more »
Posted by Sean Cranley at 4:54 PM No comments:

BASD - Five Blows in a Row for Rational, Local Control!


Vote Totals:
Todd Terry 1,983
Rosanne Hahn 1,751
William Cambpell 1,677
Bob Lemken 1,003
Jim Berndt 964
Catherine Thielen 327
PS. I was kind of pulling for Jim Berndt. He told folks at the forum sponsored by the Standard Press that his Daughter had just graduated from an out of state college with a teaching degree. But when he asked her if she was coming home, she said that Wisconsin is no longer a good place to be a teacher. Obviously he raised an intelligent daughter who gets what's going on in the Badgered State!

The other WeVoBee, Thielen dropped out. Pitty. Based on her letters to the editor, hearing her debate would have been worth twice the price of admission!

Posted by Sean Cranley at 11:01 PM No comments:


Join the Conversation on the BAP Yahoo Group & Facebook