Once again, Ketterhagen's got his crazy on. Phil has apparently fallen victim to recent attempts by some rightwing extremists to turn history upside-down by rehabilitating the reputation of Senator Joseph McCarthy -R, WI. you can read about it here in the Burlington Standard Press, with commentary to follow: http://myracinecounty.com/?p=14972

It seems Mr. Ketterhegen objected particularly to the donation of a DVD of the movie Good Night and Good Luck, a movie that recounts how newsman Edward R. Murrow exposed McCarthy for what he was a liar, a bully and threat to American freedoms.

Standard Press Excepts: He (Ketterhagen) said “Good Night, and Good Luck” vilified McCarthy, and didn’t address the historical context of the senator’s behavior. “Correct info should come from the Venona Papers which were released in 1994 from the Russian archives which shows McCarthy was totally correct in his findings,”

Ketterhagen also said at the meeting that he had reviewed teaching materials in the past, and had found a disproportionate amount of communist or socialist authors.

“I’m not going to allow the teaching of a philosophy, or a ‘left’ thing,” Ketterhagen said. He also held up a number of films he personally brought to the meeting, saying that most of the board would consider them too biased toward the “right” for use in the district. When asked, Ketterhagen declined to give the names of the films. End Excerpts
Notice that Ketterhagen not only echos McCarthy with his vague accusations regarding communist/socialist authors and what philosophies he is "going to allow", he also cited the Venona Papers, the very documents used by rightwing revisionists to attempt to justify McCarthy's behavior. Well, below is an article from the Wall Street Journal that demonstrates just how wrong the sort of upside-down thinking Mr. Ketterhagen is swallowingis , but how dangerous it is with regard to our potential to repeat the tragic mistakes of our past. After all, there certainly has been no shortage in the past few years of people of Mr. Ketterhagen's ilk making false and hate-filled accusations at our President of being a communist or a socialist.
WSJ Article: http://online.wsj.com/news/articles/SB120882522444233275
Excerpts: "The problem was that McCarthy lied about his information and figures," Lamphere said. "He made charges against people that weren't true. McCarthyism harmed the counterintelligence effort against the Soviet threat because of the revulsion it caused."
During the hearings, McCarthy failed to substantiate his claims that communists had penetrated the Army. He did, however, insinuate that Fred Fischer, a young lawyer at Hale and Dorr, the law firm representing the Army, was a communist sympathizer because he'd been a member of the National Lawyers Guild at Harvard Law School. Supreme Court Justice Arthur J. Goldberg had also been a member of the group, which was alleged to be a communist front.
Upon hearing this accusation, Joseph Welch of Hale and Dorr, responded, "Until this moment, senator, I think I never really gauged your cruelty or recklessness." When McCarthy continued to hound Fischer, Welch said, "Have you no sense of decency, sir, at long last? Have you left no sense of decency?"
A Senate committee concluded that McCarthy's behavior as a committee chairman was "inexcusable," "vulgar and insulting." On Dec. 2, 1954, the Senate voted 67-22 to censure him; on May 2, 1957, McCarthy, age 48, died of acute hepatitis, widely believed to be a result of his alcoholism.
As a top Justice Department attorney, John L. Martin prosecuted scores of spies during a long career, and read many of the FBI's most secret raw files on historic espionage cases, including the files on Julius and Ethel Rosenberg, Judith Coplon, Alger Hiss and Rudolph Abel. "While Venona later confirmed and expanded upon what the FBI knew about Soviet operations in the U.S.," Mr. Martin says, McCarthy used "the umbrella of national security to justify his outrageous practice of besmirching reputations of loyal Americans."
Efforts to vindicate McCarthy overlook the fact that he did not help the cause of dealing with the spy threat. Rather, he gave spy hunting a bad name. In sanctioning McCarthy's intimidating tactics and dishonest charges, revisionists dangerously invite history to be repeated.
Once again we can only conclude that Phil Ketterhagen is not only wrong, he's a nut and an embarrassment to the Burlington Area school District.
Posted by Sean Cranley at 7:40 AM No comments: 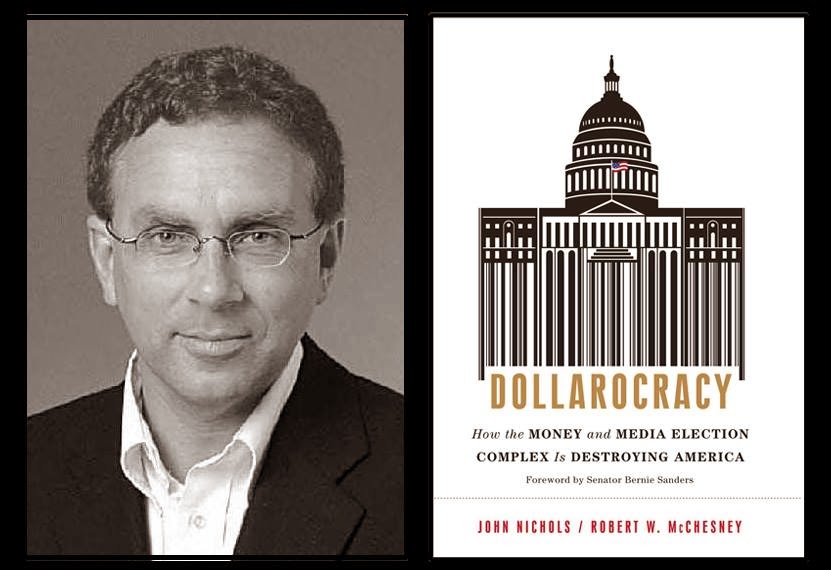 
John Nichols, a pioneering political blogger, has written the Beat since 1999. His posts have been circulated internationally, quoted in numerous books and mentioned in debates on the floor of Congress.
Nichols writes about politics for The Nation magazine as its Washington correspondent. He is a contributing writer for The Progressive and In These Times and the associate editor of the Capital Times, the daily newspaper in Madison, Wisconsin. His articles have appeared in the New York Times, Chicago Tribune and dozens of other newspapers.
Nichols is a frequent guest on radio and television programs as a commentator on politics and media issues. He was featured in Robert Greenwald's documentary, "Outfoxed," and in the documentaries Joan Sekler's "Unprecedented," Matt Kohn's "Call It Democracy" and Robert Pappas's "Orwell Rolls in his Grave." The keynote speaker at the 2004 Congress of the International Federation of Journalists in Athens, Nichols has been a featured presenter at conventions, conferences and public forums on media issues sponsored by the Federal Communications Commission, the Congressional Progressive Caucus, Consumers International, the Future of Music Coalition, the AFL-CIO, the Rainbow/PUSH Coalition, the Newspaper Guild [CWA] and dozens of other organizations.
Nichols is the author of The Genius of Impeachment (The New Press); a critically acclaimed analysis of the Florida recount fight of 2000, Jews for Buchanan (The New Press); and a best-selling biography of Vice President Dick Cheney, Dick: The Man Who is President (The New Press), which has recently been published in French and Arabic. He edited Against the Beast: A Documentary History of American Opposition to Empire (Nation Books), of which historian Howard Zinn said: "At exactly the time when we need it most, John Nichols gives us a special gift--a collection of writings, speeches, poems, and songs from throughout American history--that reminds us that our revulsion to war and empire has a long and noble tradition in this country."
With Robert W. McChesney, Nichols has co-authored the books It's the Media, Stupid! (Seven Stories), Our Media, Not Theirs (Seven Stories), Tragedy and Farce: How the American Media Sell Wars, Spin Elections, and Destroy Democracy (The New Press), The Death and Life of American Journalism (Nation Books) and, most recently, Uprising: How Wisconsin Renewed the Politics of Protest, from Madison to Wall Street (Nation Books). McChesney and Nichols are the co-founders of Free Press, the nation's media-reform network, which organized the 2003 and 2005 National Conferences on Media Reform.
Of Nichols, author Gore Vidal says: "Of all the giant slayers now afoot in the great American desert, John Nichols’s sword is the sharpest."
Posted by Sean Cranley at 7:40 AM No comments: 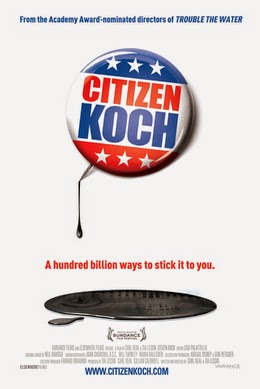 In this searing exposé on the state of democracy in America and the fracturing of the Republican Party, Academy Award®-nominated directors Carl Deal and Tia Lessin (Trouble the Water; co-producers of Fahrenheit 9/11 & Bowling for Columbine) follow the money behind the rise of the Tea Party. CITIZEN KOCH investigates the impact of unlimited, anonymous spending by corporations and billionaires on the electoral process, featuring stories of life-long Republicans whose loyalty is tested when their families become collateral damage in the GOP fight to take organized labor out at the knees. Alternately terrifying and funny, CITIZEN KOCH is an essential and powerful portrait of our political times.
Posted by Sean Cranley at 7:50 AM No comments:

Declare Your Independence This 4th of July! 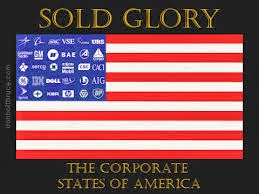 Final Push for Move to Amend in Burlington this Weekend!
Corporations now have Religious Rights!Is your corp circumcised?
Five men costumed in priestly robes have now bestowed souls on so-called 'corporate persons" in Merica. It's time to end this heresy confronting our democracy. And you can help this Independence Day weekend when we celebrate the beginning of our revolution, sparked not only by the plutocratic dictates of the British crown, but also by the predatory monopoly of the East India Company, the global corporate behemoth of its time and the target of the Boston tea Party!
We're so close to our goal, but time is running out! Come to Echo Lake Park after 3:00 on the Fourth of July and add your John Hancock to the petitions to get a referendum on the ballot in the City of Burlington in November advising our representatives of the need to overturn the Extreme Court's ruling on Citizen United vs FEC and affirm that corporations are not "People" they are legal constructs and money is not speech, it's merely amplification. We will have folks there to collect your signature. All you need to be is a resident of the City and eligible to register and vote.
Besides, you're going to have fun at the Dance and Fireworks and I personally vouch for the band Lunchmoney Bullies! http://www.burlington-wi.gov/CivicAlerts.aspx?AID=145
You can also stop by 324 Amanda St. on Saturday (7/5) between 9:30 and 2:00 from where we will be canvassing and sign the petition or pickup a walk packet and get some exercise, fresh air and signatures!
Thank you,
Sean
Posted by Sean Cranley at 9:19 AM No comments: