In fact it saved our butts.

The scary part is that this Republicon Regressionary Recession cost us 16% of GDP, whereas the last Deregulatory GOPster Debacle the S&L Crisis only cost us 6% of GDP. Meaning that the Cons have gotten almost three times more effective at fucking things up in the last 30 years. We're listing to starboard now, one more turn at the tiller from these guys and and we'll capsize!

EXCERPTS:
A paper by economists Alan Blinder, (McCain advisor) an economist at Princeton and a former vice chairman of the Federal Reserve , and Mark Zandi, (Clinton advisor) the chief economist at Moody’s Analytics, finds that without the Troubled Asset Relief Program (TARP) that bailed out the nation's financial sector, the bank stress tests, the emergency lending and asset purchases by the Federal Reserve, and the Obama Administration’s fiscal stimulus program - the much maligned American Recovery and Reinvestment Act of 2009 (ARRA) - the nation’s gross domestic product would be about 6.5 percent lower this year.

Additionally, Dr. Blinder and Dr. Zandi find that the US economy would have lost an additional 8.5 million jobs, on top of the more than 8 million lost so far; and the economy would be in the midst of a deflationary asset spiral, instead of low inflation. Overall, they conclude that the aggregate effects of the TARP and the ARRA "probably averted what could have been called Great Depression 2.0."

Mr. Blinder and Mr. Zandi emphasize the sheer size of the fallout from the financial crisis. They estimate the total direct cost of the recession at $1.6 trillion, and the total budgetary cost, after adding in nearly $750 billion in lost revenue from the weaker economy, at $2.35 trillion, or about 16 percent of G.D.P.

WGTD 91.1 FM Kenosha, 101.7 Elkhorn and 103.3 Lake Geneva Gateway Tech's public radio stations) will be featuring the Platte River Yacht Club (PRYC) on their Noon Tunes segments this week. The segment airs at about 12:25 PM each day and features local recording artists. The PRYC is a group of consisting of myself, family and friend who play folk and bluegrass music. Who knows, they might even play one or two of the songs I penned.
Posted by Sean Cranley at 9:01 AM No comments: 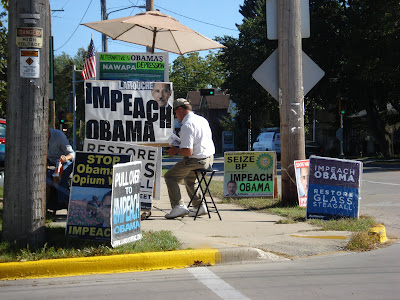 I'm not sure what the Larouche reference is. Is he still emitting crazy from the grave? Of course ya gotta have Obama with a hitler stache because of all the atrocities he's committed making him Adolph-like, right?

I do have to agree with the restorer Glass-Steagals part, but how it overturning in 1999 is Obama's fault or grounds for impeachment is beyond me. Hell that was GOPster Phil Grahm's misdeed.

Obama's recession, yeah right, funny how it started well before he even took office. How stupid and whacky can these teabaggers get!?
Posted by Sean Cranley at 6:10 AM 8 comments: