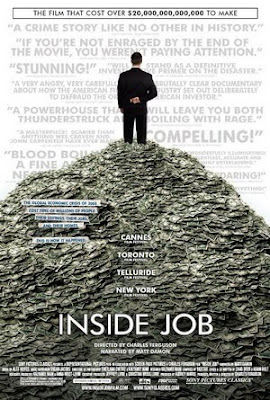 PUBLIC IS WELCOME - ADMISSION FREE!
Bring a snack and your favorite non-alcoholic beverage

JOIN US IN RESTORING WISCONSIN! – WE ARE THE NINETY-NINE PERCENT!
Posted by Sean Cranley at 2:59 PM 1 comment:

Labels: Movie Inside Job, Recall Walker Training, We Are The 99%

Greetings progressive residents and friends of the Burlington Area School District, we have a frightful emergency. Our public schools are under a coordinated attack from a Tea Party (TP) group in the form of WeVoteBurlington (WVB). The outcome of the first battle (it won’t be the last) in this attack will be decided on Halloween at the School Board meeting to be held in the BHS auditorium on Monday October 31st at 7:30 where they will try to brow beat the members of the Board regarding adoption of the district’s budget.

I’d like to place this event in the broader context to better understand what is happening and why. Mark Belling has promoted this attack and Charlie Sykes is threatening to bring in bus loads of outside agitators, single-issue anti-tax zealots to flood the meeting. People of goodwill need to be present and ready to speak up (three minutes allotted per person) to provide a counter-balance to this coordinated TP attack and to support our elected representatives on the Board who have gone through the months-long process of developing a reasonable budget for our public schools which are the central organizing, social institution of our community! Please email your Board members regardless of whether you can be at this meeting and let them know your position: http://www.basd.k12.wi.us/boardmembers.cfm

Tea Party Connection: I know that “coordinated” sounds like conspiracy, that “attack” may seem like hyperbole and that representatives of WVB recently denied their TP status in the Standard Press. But I will demonstrate why all three are apt descriptions of what we face. WVB held a legislative night on October 8th at Burlington’s public high school which featured as one of the key guests Tim Dake of the Grandsons of Liberty, a bonafide TP group promoting the “Legislative Agenda for the Wisconsin TEA Party Movement – 2010/2012”. The legislative items listed in this agenda are noted as being sponsored by TP groups from all over the state including: Uninfringed Liberty, Campaign for Liberty, Wisconsin GrandSons of Liberty, Two Rivers Tea Party, Rock River Patriots, Menomonee/Marinette Sons and Daughters of Liberty, Manitowoc County TEA Movement, Americans for Constitutional Enforcement and the Rock County Voter Education Forum, a pungent brew indeed. The strategy is to have a Wisconsin TP group adopt a piece of legislation and through activism to help push it through our legislature. To see the disturbingly ill-willed TP legislative agenda which precisely mirrors that presented at the WeVoteBurlington event go here: http://www.wisconsingrandsonsofliberty.com/

Attack on Public Education: That takes care of the TP connection, now to justify my use of the words “coordinated attack”. The TP groups cited above are promoting this legislative agenda, but they didn’t draft the legislation. Most of these bills were written by members of the secretive, Koch brother funded, American Legislative Exchange Council (ALEC), where global corporations pay big bucks to sit down with Republican State Legislators and draft laws in their interest to rule you from your State House. Although the special interests behind this are narrow, their agenda is very broad and includes the dismantling and privatization our public school systems in the United States of America. Why? Power, including the power to make profits for the “Educational Entrepreneurs” and to destroy unions. For more information on ALEC’s moves to starve public education see this article: http://www.commondreams.org/view/2011/07/14-12 and this website: http://alecexposed.org/wiki/Privatizing_Public_Education,_Higher_Ed_Policy,_and_Teachers
For information on ALEC in general go here: http://alecexposed.org/wiki/ALEC_Exposed

Are the WVB folks aware of the selfish and sinister agenda they’re helping to advance and who is behind it? Probably not. When it comes to public education, they’ve been conditioned to focus on only two things, taxes and thugs (their term for our teachers). But the Tea Party movement has been co-opted and turned from grassroots to astroturf by Americans For Prosperity (Plutocracy), the Club For Growth and other well funded groups founded by one-percent folks like the billionaire Koch Brothers, Dick Armey and others. The agendas of these groups are handed down from on high by corporate sponsored conservative think tanks founded by the Koch brothers and others like them, to serve their self-interest. For some insight on the Americans For Plutocracy and the Koch Bros agenda for our public schools watch this short video: http://www.youtube.com/watch?v=2mbJhjCbwo8

Furthermore, the WVB people have probably never even heard of ALEC. After all, it is supposed to be a secret. The likes of Belling and Sykes are certainly not going to expose ALEC and its goals. It was only revealed last spring that local State Representative Robin Vos is also the ALEC state Co-chair, tasked with enacting the ALEC agenda in Wisconsin like his counter parts in the other states. You’d think he’d be proud of such a lofty distinction, but he doesn’t discuss it or campaign on its “merits”. Skirting Wisconsin’s good government campaign laws, Vos even got an ALEC “Scholarship” worth thousands of dollars for airfare and hotel accommodations to be wined and dined in a sunnier clime by the ALEC corporate lobbyists who fund the organization. A “Scholarship”, why that’s a major award to be illuminated and displayed prominently before your constituents! But modest Robin never mentions it. You know what they say, news is what people want to keep hidden, every thing else is publicity.

And now PR Watch has discovered who Wisconsin’s secret ALEC Corporate Co-chairs are: http://www.prwatch.org/news/2011/09/11031/koch-lobbyist-alec-state-co-chair-wisconsin-scholarships-raise-ethics-concerns Every state has them and guess what, one of Wisconsin’s is a lobbyist for Koch Industries! Such a tangled web! And I’ve connected only a few of the dots here. There are more, many more.

The citizens of Burlington have elected a local School Board to represent our interests in our community. It’s called local control, a principle the Republican Party once stood for. We must not let a few vocal people, acting at the behest of squawk-radio propagandists, force on to us a hidden agenda that comes from selfish, narrow and far away special interests that have no stake in what becomes of our children or our community, other than how it advances their national political goals and their potential for future profits to be reaped at the expense of millions of students across the nation and right here at home. Scary!

Thank you for your attention. You are the 99%! Please make yourselves heard at the Board meeting on October 31st. Boo!
Posted by Sean Cranley at 1:18 PM 2 comments:

Live Feed from NY Occupy Wall Street in the middle of the night.

globalrevolution on livestream.com. Broadcast Live Free
If you want to chat live with people across the country while watching at the Live Stream website here is the link. It's pretty damn cool.

While I was watching they showed the solar panel flat bed truck that supplies the power for the protesters to use.  It's being provided by Green Peace and says "Give Up Coal" on the side of it.  I'm just so impressed right now.

They have lots of great food available from donations made from all over the country.  Most people have sleeping bags and are curled up sleeping on hard ground toughing it out.

The mainstream media won't even talk to the guys doing the live feed.

The secret fALEC Wisconsin State Co-Chairs have been unveiled! Koch industry lobbyists Amy Boyer and Byron Wornson have been revealed by PR Watch as secret private sector Co-Chair that work along side Robin Vos to enact the fALEC agenda in our once proud state of clean and open politics: http://www.prwatch.org/news/2011/09/11031/koch-lobbyist-alec-state-co-chair-wisconsin-scholarships-raise-ethics-concerns

Lavish all-expenses-paid "Scholarships" are used to skirt Wisconsin's lobbying laws that prohibit ANY gifts and to fly, house, wine, dine and buy corporate access to OUR representatives to enact THEIR laws.This is a traitorous betrayal of the foundational American principle of the right to the informed consent of the governed!

Why didn't Vos tell the voters he's in ALEC? Why didn't he tell us he's the State of Wisconsin Co-chair? Why all the secrecy? If Vos gets his legislative ideas from his constituents as he claims, then he doesn't need ALEC and should renounce ALEC and all it's works as the democracy betraying nest of corporatist vipers that they are.
Posted by Sean Cranley at 7:51 AM No comments: