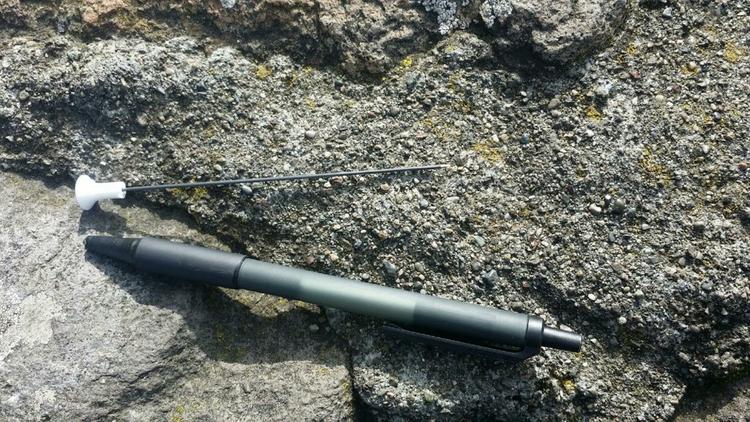 Unless of course he uses the element of surprise, then your only option is to mutter "Holy Dartanian Batman" as you slip into unconsciousness.

Be afraid, be very afraid!

Posted by Sean Cranley at 1:30 PM No comments:

It's a very good thing that Republicons wear tiny little lapel flags to remind us all about their "patriotism", because otherwise how would we know? Scalia is being lauded as a defender of the Constitution (even though he believed it's dead), but let's remember him for what he really was, A Robed Reactionary Rationalizer. 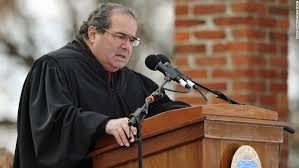 In ordering flags to fly at half mast Wrong Way Walker produced the following standard Republicon Hero, Patriot, American blah blah Bull Shit: “Justice Scalia was a patriot and a hero of American legal jurisprudence.  A lion of the justice system, he stood for the letter of the law and did not allow politics of the day to sway his dedication to the constitutional role of the judiciary.  Justice Scalia served our country with honor and distinction.

As a believer in the Divine Right of Kings, Scalia was NONE of Those Things!

God's Justice and Ours by Antonin Scalia - EXCERPT: "St. Paul had this to say (I am quoting, as you might expect, the King James version):

Let every soul be subject unto the higher powers. For there is no power but of God: the powers that be are ordained of God. Whosoever therefore resisteth the power, resisteth the ordinance of God: and they that resist shall receive to themselves damnation. For rulers are not a terror to good works, but to the evil. Wilt thou then not be afraid of the power? Do that which is good, and thou shalt have praise of the same: for he is the minister of God to thee for good. But if thou do that which is evil, be afraid; for he beareth not the sword in vain: for he is the minister of God, a revenger to execute wrath upon him that doeth evil. Wherefore ye must needs be subject, not only for wrath, but also for conscience sake. (Romans 13:1-5)

This is not the Old Testament, I emphasize, but St. Paul. One can understand his words as referring only to lawfully constituted authority, or even only to lawfully constituted authority that rules justly. But the core of his message is that government—however you want to limit that concept—derives its moral authority from God. It is the “minister of God” with powers to “revenge,” to “execute wrath,”

So in his decision on a matter of American LAW, Scalia cites not only a religious text, but one from a man who never met the founder of that religion, and whose "authority" is derived soley from a supposed meeting between him and God, alone and in the middle of a desert!

Now juxtapose Scalia's form of legal "Reasoning" with what the founders of our Republic wrote about the source of Governmental Authority in the Preamble to our Constituion:

"We the People of the United States, in Order to form a more perfect Union, establish Justice, insure domestic Tranquility, provide for the common defence, promote the general Welfare, and secure the Blessings of Liberty to ourselves and our Posterity, do ordain and establish this Constitution for the United States of America."

I'm sure Scalia also had one of those little lapel pins tucked up somewhare under his preistly robes, but he was no patriot, because he didn't even unsterstand what the word is supposed to be to an American!

Nor was he a "lion of the justice system" who served "with distinction and honor". One need only look at his disgusting pretzel logic in his attempt to rationalize that Bushyboy's use of torture did not violate the Constitutional prohibition on Cruel and Inhuman Punishment, because, and I quote; "Has anybody ever referred to torture as punishment? I don't think so."

So in my estimation, Scalia did America a huge favor in passing off at a "Hunting" camp in Texas last saturday. The only remaining question is, Was Cheney there with his Scotch and his Shotgun?
Posted by Sean Cranley at 6:58 AM No comments:

No to Necci this Tuesday! 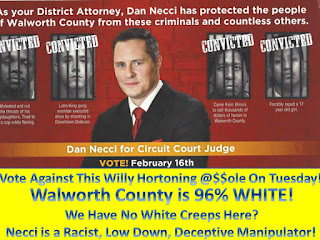 I received this piece of garbage in the mail this week. I don't have time sit in on court cases, so I don't know much about the "judgment" of the people in our Walworth County Criminal Injustice System. I bet I'm not alone in that.

But this mailer was disturbing in so many ways, as follows:

This man's mailer is Racist. It's inflammatory. But mostly, it's a reflection of His Ethical and Moral Terpitude.

This man is not fit to judge fudge, let alone Humans Being American Citizens!

Say No to Necci!

Posted by Sean Cranley at 8:55 PM No comments: